Leading the Charge: Is Electric the Future of Fleet?

Home »  Blog »  Leading the Charge: Is Electric the Future of Fleet?

The race is well underway as major automakers and startups work diligently to bring all-electric trucks to market. Though these companies are largely targeting the “daily driver” segment, it’s no secret that there remains great potential in commercial applications for hybrids and electric vehicles.

While significant social buzz and pre-order numbers indicate that many casual drivers are excited to embrace the all-electric truck, others whose vehicles serve as an extension of their workforce have no shortage of questions before incorporating an EV fleet into their operations.

How cost effective is the investment compared to traditional internal combustion engine vehicles? What is the life expectancy of an electric fleet truck? And, most importantly, how will it perform in comparison to our current fleet vehicles?

Ahead, we’ll provide some insight on EVs that will help you become more informed as the landscape for work trucks as we know them continues to rapidly change.

The internal combustion engine (ICE) is at the core of vehicles as we currently know them. The engine consists of cylinders, pistons, and a number of other components working together to power the vehicle using a fuel source such as gasoline or diesel.

Electric vehicles (EVs) are entirely battery-powered by electricity and feature a travel range of up to 400 miles per charge in most cases, comparable to (if not greater than) the range of which its ICE counterpart can travel on a full tank of gas.

Plug-in hybrid vehicles (PHEVs) employ both an electric motor and an ICE, utilizing the benefits of each. The PHEV operates primarily on the electric motor as its main source of operation before switching to the ICE as an auxiliary source of power.

Only a handful of manufacturers have disclosed the price points for their upcoming electric trucks. Based on information currently available from OEMs, it’s likely that pricing on EV versions of some of the most commonly used and popular models will be comparable to their ICE counterparts.

Cost could be marginally higher upon initial widespread availability of models. But, as with most things, we could anticipate a leveling off/decrease as more users opt to electrify their fleets. In addition, the likelihood of federal and state-level incentives and rebates should make the purchase of an electric work truck far less of a burden on your bottom line.

But, there’s more to consider than the initial cost of the vehicle itself. There are also important long-term factors to consider that fall under the cost of ownership category. This includes energy costs (which replace fuel costs) over time.

Fuel economy is measured differently in PHEVs and EVs. Typically, range is measured in MPGE (miles per gallon equivalent) and kilowatt-hours (kWh) for electric vehicles and plug-in hybrids respectively.

In preliminary testing or specs released by manufacturers, most light-duty electric trucks have a range of no less than 200 miles per full charge. That distance can be increased based upon how your vehicle is configured, particularly the size of the battery it employs. Of course, range will also fluctuate based upon driving style/conditions, payload, and towing, just as fuel economy does with an ICE.

Automakers have indicated that EV versions of their popular light-duty trucks are likely to exceed the horsepower, payload, and towing performance of their ICE predecessors, which was initially one of the biggest questions surrounding the use of electric trucks in a commercial capacity. Much of this mystery has been answered with real-world testing and advanced engineering on pre-production models, though more testing needs to be completed to instill full confidence in buyers.

Towing performance is one of the biggest question marks remaining as consumers and tradespeople wait for these production vehicles to hit the market and be used in their particular line of work. As mentioned, the more significant your towing and payload demands become, the less your range will be as a result.

To help ease woes, many manufacturers have or will be incorporating smart technology that will calculate and monitor your truck’s capabilities. This includes incorporating digital scales to calculate accurate travel range and some manufacturers even offering the ability to route your path of travel where more charging stations are available, which brings us to our next point.

Not long ago, electric vehicle charging stations were practically nonexistent. However, with more EVs on the road and a significant push for EV infrastructure, the charging network continues to grow exponentially.

Your business may also want to install a charging station(s) where you park your fleet.

Charging units vary in price based upon installation costs as well as what level charger you decide to implement. Level 1 chargers, such as a basic wall-mount system, are one of the cheaper options, starting at around $300 for the unit itself. As you can imagine, the higher the charger level (levels 2 and 3 offer quicker charging times), the higher the price of the unit and installation costs.

However, an on-site charger will be beneficial, allowing you to charge your fleet overnight and be road-ready the next day, eliminating the need for a stop on the way to the jobsite.

The electric motors that power EVs require fewer components to operate than the internal combustion engine. Thus, maintenance costs for EVs are expected to be much lower. Coupled with the fact that EVs will not require fluid changes as part of regular maintenance, it would seem that the cost of maintenance will indeed be lower than a traditional gas-powered vehicle.

According to a study of Consumer Reports members, results indicate that owners of battery electric and PHEV owners are paying half as much as ICE owners for repair and maintenance to their vehicles.

As with any vehicle, regular maintenance will improve the longevity of its operation. While it’s slightly premature to estimate how many years we’ll get out of an EV work truck, with proper care, odds seem good that they will rival, if not exceed, the life expectancy of the current generation of work trucks.

While a vast amount of hard data is readily available, statistics regarding total cost of ownership and benefits will remain, to a degree, uncertain until there are more electric and hybrid fleets on the ground and in regular use for results to be recorded. However, early stats and other information released by OEMs indicate that the future of electric vehicles is promising and capable, particularly in the commercial vehicle space.

And while we have yet to see much information in regard to heavier-duty vehicles (those classified as class 5 and up) as it pertains to EV options, we anticipate seeing more news on those developments sooner as opposed to later.

In the meantime, some will remain hesitant to make the switch to EVs until the technology has had time to produce more concrete findings on performance, longevity, and ROI. To their benefit, there are multiple online calculators that will help you determine the potential cost savings of electrifying your fleet.

Regardless, the groundwork has most certainly been laid as EVs are leading the charge (for lack of a better term) toward an electrified future for fleet operations. With continual advancements in technology, the reality of electric vehicles surpassing the capabilities of their gas-powered predecessors could arrive much sooner than anyone ever anticipated, changing the landscape of the industry and ushering in the next generation of work vehicles. 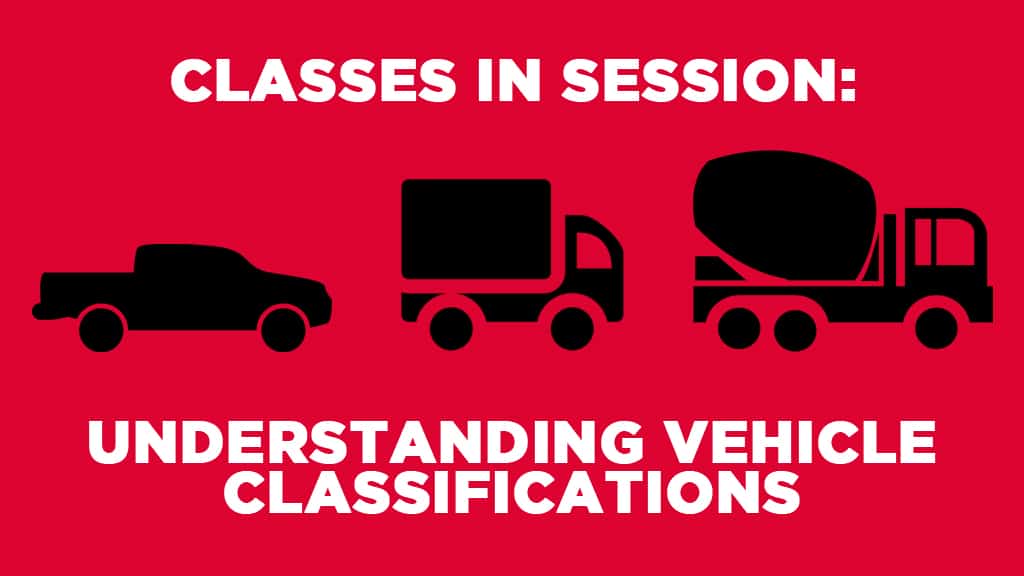 Whether you’re curious about how vehicles are classified or you’re thinking about which vehicle class is best suited for your line of work, check out our overview. 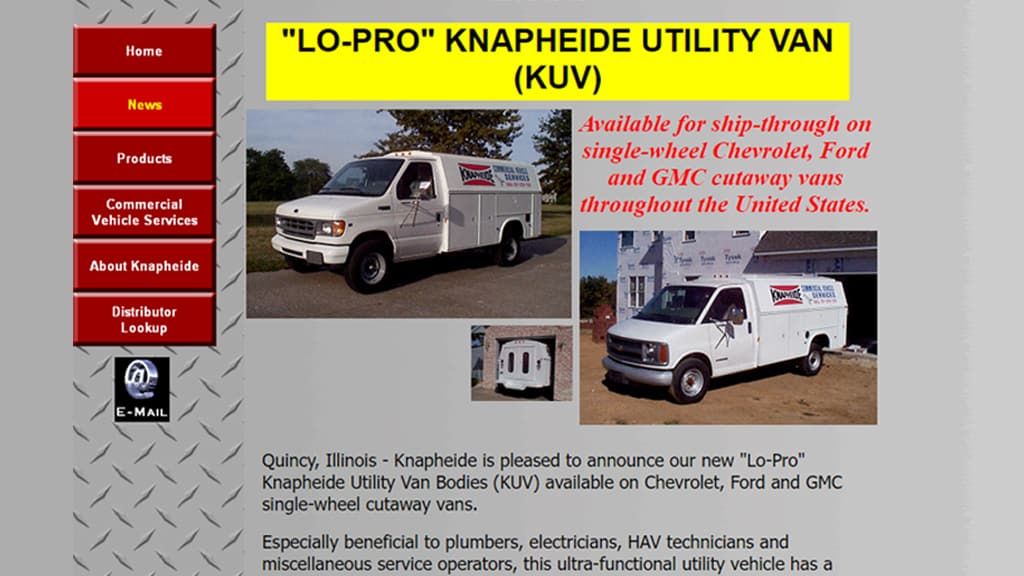 Knapheide Nostalgia: A Look Back at Our Website 20 Years Ago

We recently reviewed an archive version of our website. Join us as we evaluate our web presence in 2001. After all, what's life if you can't occasionally poke fun at yourself? 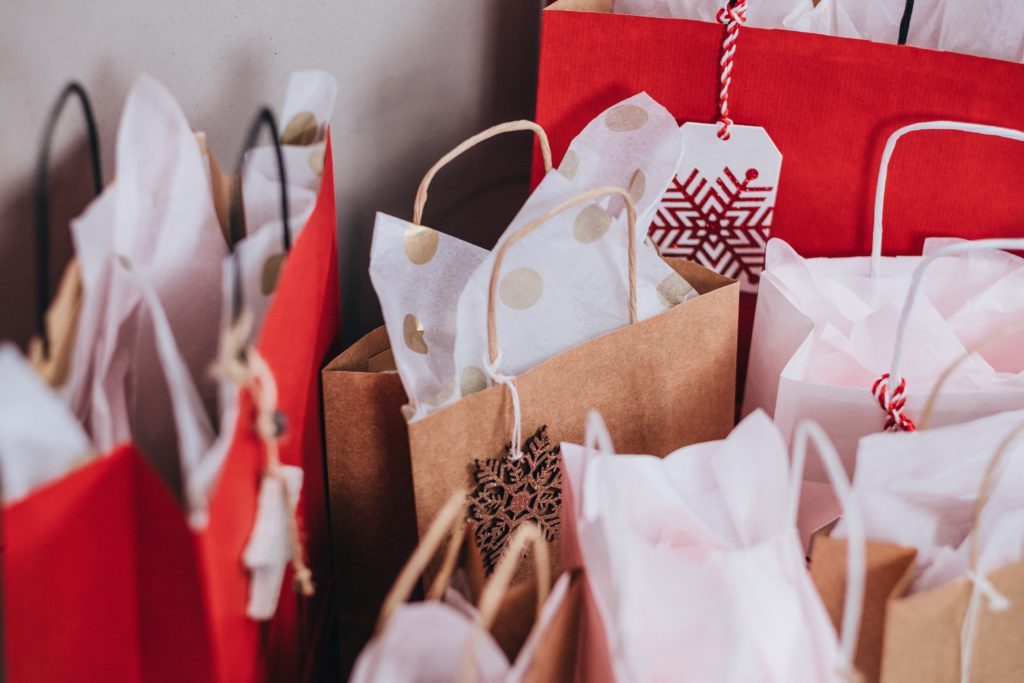 Looking for practical gift ideas for your crew this holiday season? We’ve scoured the internet to bring you some of the best gift ideas!